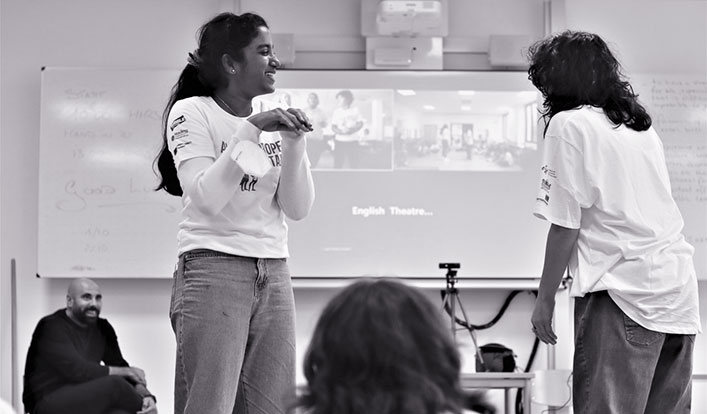 A bunch of theatre kids from Düsseldorf and Reading, England, on a Zoom conference. With the Assistance of Mr. Valente, the English Theatre Düsseldorf and two theatre tutors from reading, the children from both countries partook in theatrical activities and games with one another, despite the distance. The topic for this weekend was Europe, its past, presence, future and its people. A reoccurring word in our Brainstorm on Saturday was “Change” what changed in Europe, what will change, what would we like to change and how did we change? We got divided into small groups and improvised little skits about change in Europe.

A group of three performed a little musical and chorographical skit, in which a young girl, stuck in an office job would like to change her career path and pursue singing. She sees an audition poster from a music record. Little did she know, that the audition was a scam. But she had already quit her job so what was she supposed to do? Europe is a place, that supports dreams and is open for change, and so, as she was singing while doing her work as a cleaning staff, an agent overheard her and invited her to a real audition. She had changed her life. Another group of two, originally five performed a comedic skit about climate change. The group however, was confronted with quite a hard situation. Three of the members sadly couldn’t make it on Sunday, and so, a few hours before their finale performance, they thought of a whole new technique. They recorded most of the interactions and cut the clips together. The skit started with a protest. All the students were shouting and holding up posters demanding action against climate change but in middle of all the rabble, a student received a notification. There was news about the whole situation. The clips showed, how different countries and their leaders reacted on climate change. Most countries were ignorant, but the prime minister of Finland wanted to invest in the climate. For change and a better Europe. The protesters seemed to be very content and happy with the news and greeted the prime minister with joyful cheers. The last group, a group of four, originally five, consisted mostly of children of immigrant parents. They showed the life of a child, immigrating at a young age due to the war, how his life and his family situation changed and how he developed. The first scene showed a mother preparing dinner, trying to ignore the sound of bullets for her mind´s wellbeing. As the family, consisting of the mother and her two daughters, was dining, her grandson ran to his mother, telling her about the family next door, from which they haven´t heard of in a while. They were dead. The two sisters argued. The eldest was planning to flee with her son, the youngest blamed her for wanting to leave the sick mother. Eventually, they left and flee to Germany by illegally crossing the borders. In Germany, they got a lot of support, like home and shelter from the government, it wasn´t but as easy as they thought it would be, since they were confronted with racism and people mocking their culture. Despite all this, the son found friends in his new home. It seemed to go well, but his aunt came to Germany to deliver terrible news. His grandmother had passed. She blamed her older sister for it, who at first didn´t want to believe it. Now with nowhere to go, the aunt decided to stay with her sister. She looked at her nephew who had changed, she thought, he had become more European.

The group in reading performed their skit in one big group. It played at a parent teacher conference with a judgementally portrayed teacher, discussing her students´ grades and behaviour. The first scene played in the waiting room. We saw three families and a child by itself. The first student to attend came alone, telling the teacher that their parents couldn’t make it. They seemed quiet but were a straight A student. The next student was from Spain, there with their single mother, which the teacher questioned a lot. “Is it only the two of you? No husband?”. The student seemed to have failed English, so the teacher asked about their ethnic background. When she found out, that they were from Spain, she got pushy and demanded the child to take an English course for people who don´t have it as their first language, despite both, the mother and the student being perfectly fluent. A posh mother and her son were next. She excused, her partner, who would come later. The teacher said that her son didn’t have any difficulties academically, but that he was very quiet. As she mentioned that, another mother entered the room. The teacher told her to exit, since she was busy discussing another student’s matter, but the lady was in fact his mother. Seeing that the boy was raised by a lesbian couple the teacher asked if he had any male role models in his life and that if not, that was the reason why he was, and I quote, “such a whimp”. The reason for the boy being not very talkative, we would meet next. A Russian girl and her father were followed, and since the father wasn’t fluent in English, his daughter translated the teacher´s words to him. Or did she? The father seemed rather proud of his daughter after the teacher informed him about her failing school and being a bully. In the last scene, the teacher was exhausted from all that had happened. The other characters entered and held her accountable. Starting with the first girl, telling her that her parents weren’t informed about today’s meeting in the first place, because she didn’t want to disappoint them, the Spain student telling her, that she shouldn’t belittle them, just because they are from foreign ascent, the son of the lesbian couple telling her that he is quiet because he gets bullied and not because he got raised by two women and the Russian girl explaining that she has a difficult home life and that she is just an impressionable product of her environment.

But there was more to those two days. We also partook in activities and games to bring us closer to the students in reading and their culture. Before the weekend started, both groups were asked to record videos, introducing their city and school. We had a great laugh and got a taste of each other’s humour and character. Of course, they were informative too. We played a game, where we would act like animals, while the other group would play reporters and describe and decide what the animals would be doing. Another game we played within the group and against each other was where we had to recreate letters from the alphabet with our bodies and whichever group finished first would win. Sadly, we lost. But we hope to get our revenge soon. One other game consisted of two out of our group being shown on reading´s screen, but only from the him upwards, with two pairs of legs from their side poking out under our upper bodies. We then had to figure out how to fulfil certain tasks, like dances, while making it look like a whole body is doing that. The cherry on top were the English sweets we got to try. Of course, reading also got sent some German snacks like Hanuta and Haribo. We sure did feel silly throughout this weekend, but we mostly enjoyed ourselves way more, and feeling silly is just a part of theatre. You have to cross your own boundaries and be comically confident every once in a while. Thank you for this experience!!

if you have any questions with regard to attending the Goethe Gymnasium, please contact the following email address ki.beratung@duesseldorf.de or call 0211 8924077.